Three Key Learnings Central to MACDC’s Operations and IT Management 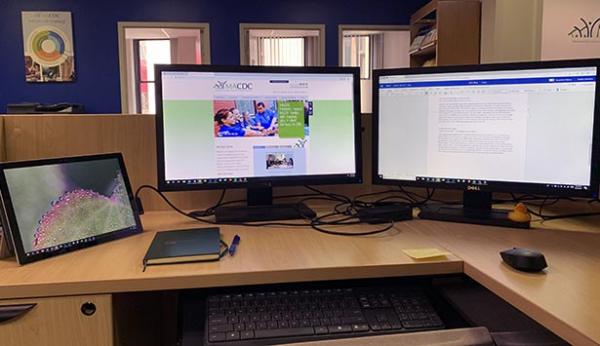 What would you do if someone came up to you and said, “I have an all-in-one solution that can increase your organization’s productivity, reduce costs, and enable you to focus more on your mission?” You would probably be skeptical, or simply ignore the person altogether because it just was an annoying sales pitch with an inevitable catch. Oftentimes, technology, in all its myriad iterations, does this to us daily (I’m not yet convinced that my life would be better if my refrigerator could tell me the weather, or if my stereo system could order laundry detergent just by my talking to it).

That being said, new technology can help advance our work if used thoughtfully and strategically. This article will focus on how technology has transformed MACDC’s operations for the better. Considering that there are many resources addressing ways for nonprofits to increase productivity and reduce costs through IT, I hope not to be repetitive, but rather to highlight how we did it and the succeeding benefits from this effort.

Over the past six years, we’ve progressed as a team to using data collected in real time to help us make decisions.  Along the way, we’ve cut our electricity bill in half, reduced our phone bill by $1,500 annually and improved our staff capacity.  But this process took time (years, not months), and required that we raise funds, hire consultants, and dedicate time to staff engagement and training.  The result, however, is significant.  While we’re a small team of eleven staff with a $1.5 million annual operating budget, we’re higher performing and have more time to focus on our mission.

I thought I would share three key learnings that are central to MACDC’s approach to operations and IT:

It’s not about technology, but people

“Do you know what you call a leader with no followers?  Just a guy taking a walk.”- Vice President Russell, The West Wing

There’s comfort and stability in doing something the same way you’ve done it for years, but that doesn’t mean it’s the best way, especially when it comes to technology.  At MACDC, we knew that we needed to update our data management technology, systems, procedures and culture.  We also knew that we could not do it all at once.  So even after we made the decision to switch to Salesforce, we didn’t make the move immediately, nor did we have all the organization’s programs and operations move over at the same time.

We started by building Excel spreadsheets that captured much of the data eighteen months before we began to move these business functions into Salesforce. Why? It’s often easier to update and change an Excel spreadsheet than it is to change workflows and processes in Salesforce (This also makes the formal discovery phase less arduous and filled with guesswork).  You’re able to engage with staff at the beginning of the migration process where you’re defining what the processes will be in the first place.  You’re able to begin reinforcing new behavior immediately and the staff are bought in to the changes.  Finally, even though I was leading the project, I wasn’t in charge of managing the capturing of the data; leadership of this work went to another staff member and allowed for additional project team ownership.

Even with the level of engagement that comes with staff helping lead the change, expect more time to be spent on training and support than building out the system technologically.  Each person learns differently and has different strengths and weaknesses.  This sounds like common sense, and it is. But it’s worth mentioning because you need to plan time for multiple trainings and then extra time for one-on-one sessions.  It’s also important to have your organization’s leadership attend all the trainings.  Everyone is busy, but if you want significant institutional change to occur, you need your executive director engaged and actively learning with the team.

Be current, not cutting edge

When do you stop fixing your old car, I mean, file server?

You’ve probably had an old car that at a certain point is just too old to keep repairing.  You need to buy new tires, but the cost of the tires will be more than the value of the car itself.  Maybe there’s some nostalgia, memories of a spontaneous road trip, or the time it took to save the money to buy the car in the first place that keeps you from moving on.  You can say this about your first car, but have you ever said that about your clunker of a file server?

This was an important lesson for us.  It’s just too expensive to be on your outdated file server. We were presented with a challenge that needed to be quickly resolved.  Our file server was approaching 95% capacity and the machine was, I believe, more than 7 years old.  It had lived a good life and had done its job well, but it was time to move on.  We had a decision to make: move to the cloud or not.  Well, the decision was easy given that ordering a new server didn’t align with our goal of being current in our technology without being cutting edge. Cloud services by late 2015 were well developed and had significant adoption.  We were able to review capabilities and decide with high confidence of the technology’s stability.

Running outdated systems, such as an aged, on-site file server, means paying to maintain the physical hardware in your office, which requires secured facilities, climate control, regular maintenance, monitoring and backups that often require onsite visits by an IT professional. Our old solution was not only more expensive than our current solution, but it didn’t provide nearly as many features that moving to the cloud provides.  Many nonprofits have moved to the cloud; it’s just common sense and there are many providers of cloud services that meet the needs of your organization.  Remember, you may love your old car, but that old server is just wasting money, staff capacity, and mission success capabilities.

Start by climbing hills, not mountains

Don’t run marathons before you can run a 5K.

MACDC’s tech overhaul didn’t start with mapping business processes that would be used to build out Salesforce.  Rather, we started with moving from our file server to the cloud.  We didn’t just copy and paste thousands of files either.  We decided to organize our files going forward according to our lines of business.  In the past, our server was messy; it likely had much more structure in the beginning than it did after many years of use by staff and interns.  Our new model is still working very well after three plus years; staff do an excellent job of making sure files are well organized.  Because we had so much storage space in the cloud, we moved all our old files to the cloud too, but there’s a rule:  You can’t edit a file that’s archived.  If you edit the file, it must be saved into the current file directory.  This isn’t a personnel policy, but a tech “rule.”  Staff simply cannot save a file to Archives.

A tidal wave of change

“Fear is the mind killer.” – from Dune by Frank Herbert

I don’t believe many people work for nonprofits because they love operations or IT.  You’re likely here because there’s a driver within you, maybe in your spirit or soul, that wants to contribute to our world that exceeds earning a wage for your efforts. But a nonprofit is a complex system that requires solid operations to run smoothly with current IT yielding results greater than antiquated technology.  Unfortunately, IT can be confusing, freeze up and not work, and especially when it’s first launched, have bugs.  Even so, we’re in an era that requires us to adapt far more quickly to significant changes in the ways we work and it’s only going to continue to accelerate.  I think it’s worth it to seize upon our IT insecurities and find ways to build efficiencies into our operational systems.  Through this process, you’ll likely reduce costs, restructure operations to be more efficient and increase your focus on mission success.