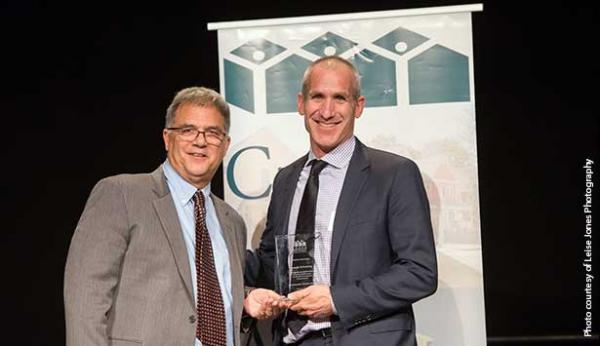 On November 3rd, Joe Kriesberg, MACDC's President, was recognized by CHAPA with a Community Service Award for his incredible accomplishments successfully advocating for critical resources to further support and drive increased community economic development across the Commonwealth.  While the recognition by CHAPA is quite an honor, the comments LISC Boston Executive Director, Bob Van Meter, spoke to the genuine passion and character of Joe and how he has dedicated his professional career to advocating for issues and causes for which he deeply cares.  Bob's comments are below:---Thank you.  It is my pleasure and honor to present the next award.Joe Kriesberg has provided leadership at the state and national level for the community development field and all those concerned about low- and moderate-income neighborhoods for more than twenty years.Joe has served as President and CEO of the Massachusetts Association of Community Development Corporations for over thirteen years. I was board chair of MACDC in 2002 when we made the decision to hire Joe as President.  I count that as the best hiring decision I ever made.  It was in fact, a no brainer, as Joe had served very ably on the staff of MACDC since 1993.As President of MACDC, he has worked to increase the power and voice of CDCs and the communities where they work.  Joe initiated biannual MACDC conventions bringing together hundreds of leaders from all over the state.  These have now become a required stop for candidates for the Commonwealth’s corner office.He has led a renewal of the community development movement in Massachusetts by winning passage of a new enabling statue for CDCs and an updated state certification process that has focused on comprehensive approaches to neighborhood development.Joe led the way in founding the Mel King Institute for Community Building, which has proved an important and durable vehicle for building the capacity of CDC staff and leaders and allies.Joe has led on housing issues, serving as co-chair of Mayor Walsh’s transition team on housing and helping to win increases in housing resources at the city level.At a time when there was a void in national advocacy, Joe led the way in creating a new national voice for community development as a founding board member of the National Alliance of Community Economic Development Associations (NACEDA).  Joe has been a leader of NACEDA since its inception and speaks regularly to NACEDA member associations around the country.Though Joe never served as a CDC executive director or a project manager, he has demonstrated time and again the qualities that all of you know are key to success in community and affordable housing development, grit and persistence.His work to win passage of the Community Investment Tax Credit showed all of that.  Joe stayed focused on the goal and made it his job to insure that Governor Patrick and the legislature did too.  For a period of weeks when Governor Patrick’s support for the legislation was uncertain, Joe made sure that at every ground breaking or ribbon cutting where Governor Patrick appeared, he would be there and that the Governor’s office would be deluged with calls from community development leaders.   In the last days of this saga, Joe and the rest of the MACDC staff were on their annual summer outing, a walking tour of the African American Freedom trail on Beacon Hill, when they encountered Governor Patrick walking his dog and Joe crossed the street to speak to the Governor.  The Governor responded, “You can stop Joe. I will sign the bill.” And he did of course.MACDC won passage of the Community Investment Tax Credit and with Joe leading the way to help implement the credit, $4.7 million flowed to support CDCs across the state in the first year.I know Joe would want me to remind all of you tonight that we have the opportunity to invest $60 million in the future of our neighborhoods over the next five years using the 50% Community Investment Tax Credit, but we need all of you to join Joe in helping us make it a success.