Earlier this month, MACDC brought a group of 20 affordable housing professionals to Ireland for an 8-day learning journey hosted by the Irish Council for Social Housing which represents non-profit affordable housing organizations throughout the Republic of Ireland a.k.a. the “MACDC of Ireland”!  For me it was an exciting opportunity to visit Ireland for the first time, to learn about the deep connections between Ireland and the Irish community in Massachusetts, to learn how housing challenges are being addressed in a different context and to build new and stronger relationships with my colleagues. I brought home many memories and wanted to share a few of them in this blog.

Our trip, which was wonderfully organized by Crystal Travel in West Roxbury, began in Wexford where we attended the Council’s biennial conference with 300 housing professionals. ICSH Executive Director, Donal McManus and ICSH Membership Coordinator Catherine McGillycuddy made all of us feel incredibly welcome – joining us for dinner, inviting Chrystal Kornegay and Rob Corley to speak on panels, introducing a few of us to the Irish Housing Minister, Eoghan Murphy, and inviting some of us to sit at the head table during the Awards Gala (I was able to sit next to a member of the Irish Parliament and meet the Mayor of Wexford). 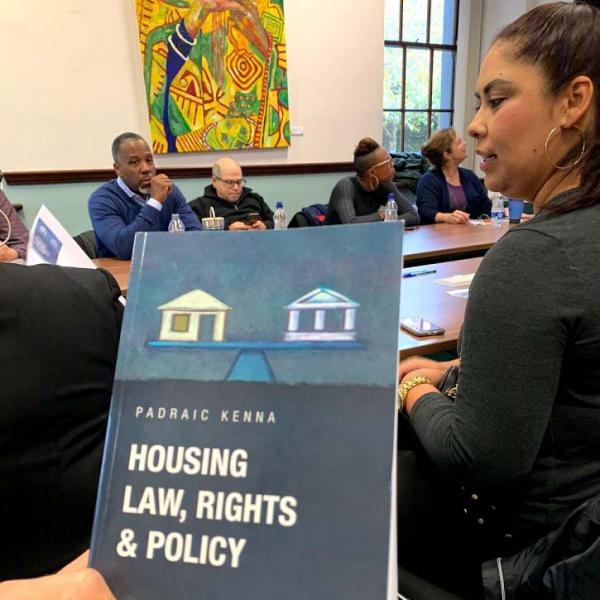 Throughout the conference, there was significant discussion about environmental sustainability and green building design as well as rigorous discussion about new regulatory oversight of the non-profit sector.  Ireland is even considering banning natural gas hook ups, a policy already adopted in the Netherlands. Housing Minister Murphy talked about escalating rents in Dublin and compared it to Somerville, MA just to help us understand (apparently, he has been to Somerville!) At the evening gala dinner, we watched the awards ceremony which frankly blew away anything that MACDC has ever done, with inspiring music and an exciting light show accompanying each award announcement! The next day we drove to Galway with a visit to a supportive housing facility developed by NOVAS called the Brother Russell House in Limerick for people living with addiction and then a stop at the Cliffs of Moher.

In Galway, we had a wonderful seminar at the National University of Ireland – Galway with Professor Padraic Kenna. Dr. Kenna has written a 1,000-page book on the history of Irish Social Housing and he is a wonderful speaker and teacher.  He also joined us for a pint at a local pub on Saturday night!  After lunch, we visited a couple of family housing schemes (their word not mine) developed by Tuath Housing – one of the largest housing nonprofits in the country.

On Sunday, we visited the Connemara region where we visited a senior housing development in Clifden developed by another large nonprofit agency called Cluid. Many of the people we met had spent years living in Boston or other parts of the United States, before returning home in retirement (see photo below).  Driving through the region, we enjoyed the beautiful rural countryside which is unlike any place I can recall being. Rob Corley, the CEO of NeighborWorks Housing Solutions and one of the organizers of the trip is originally from this region and we got to see his grandparent’s house and learn about his family history.  On the road to Dublin, we sang Irish Ballads together (albeit poorly) and then Michael O’Conner honored us by singing one song himself.  His beautiful voice and beaming smile told us everything about what it meant to be in his home country. A few hours later, as we pulled into Dublin, we put U2 on the speaker and sang together once again! 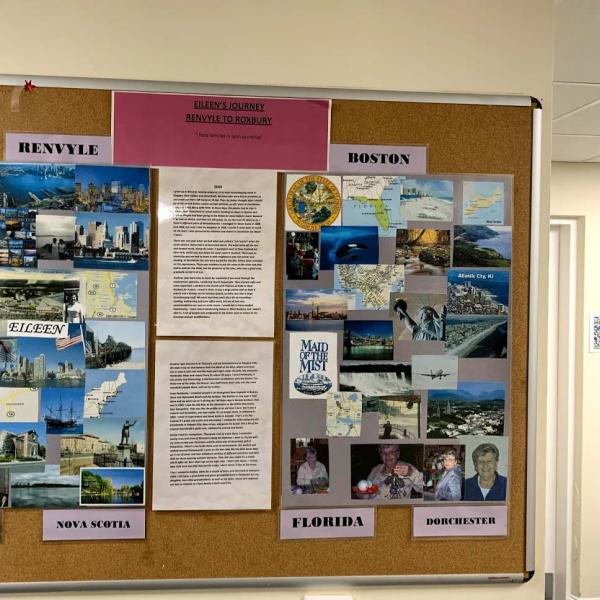 Our next visit was to Dublin where we had a 13-hour day of visits, meetings and meals with different housing leaders. We toured the Bull Alley Estate, an affordable housing development built by The Iveagh Trust over a hundred years ago!  The Trust was founded by the Guinness Family in the 1890s and is still run by the family with the mission of providing social housing to those who need it. We later met with the Housing Agency, the government agency that provides funding and oversight for the social housing sector in Ireland.  Here we learned a bit more about how projects are financed (hint: it is simpler than in the USA), about the challenges of austerity, and even the emergence of short term rent control in Dublin as a way to deal with skyrocketing rents. (Dublin’s rent control is focused on neighborhoods with particularly high rent increases and the cap is 4% per year until 2021).  Our final visit in Dublin was to the Ballymun neighborhood.  In the 1960s, the government built tall, dense social housing in this neighborhood which quickly declined much like similar developments in the United States.  Twenty years ago, the neighborhood began undergoing a complete and total redevelopment that sought to deconcentrate poverty and improve neighborhood amenities. Progress has been slow – especially due to the economic crash 10 years ago – and the neighborhood leader who we met was clearly frustrated and angry with the pace of progress.  But like neighborhood leaders here, he was undeterred and remained passionate about the place he and his family have called home for over 50 years. 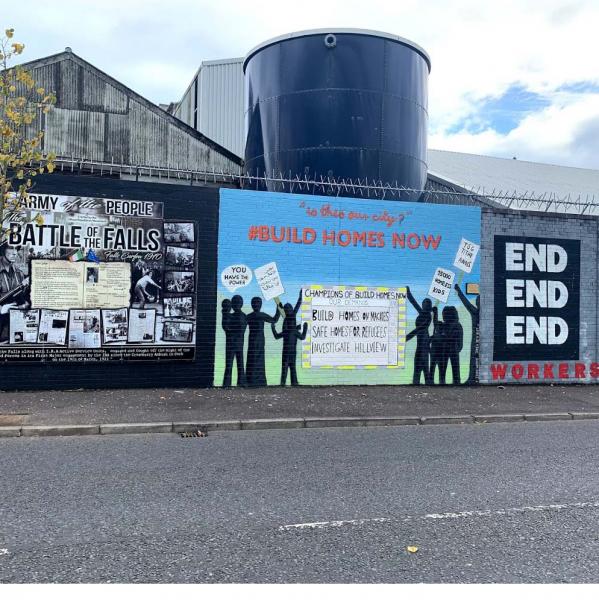 Our final day was spent in Belfast.  Crossing into Northern Ireland is both simple - (we just drove across the border like crossing into New Hampshire) and emotional – you feel the weight of history the moment you arrive.  We began with a visit to the Northern Ireland Housing Executive, a massive government agency with 3,500 employees and 88,000 units under management. We were able to meet with Peter Roberts who is essentially in charge of all housing funds in Northern Ireland. They no longer build their own housing due to government austerity in the United Kingdom, but they finance housing developed by non-profit housing associations. The NIHE was created in 1971 specifically to address the housing issues emanating from the “troubles” and seeks to offer housing on a non-discriminatory basis throughout the region. NIHE leaders took us on the tour of the neighborhoods and we got to see first hand the “Peace Walls” that divide Catholic Nationalist and Protestant Unionist neighborhoods throughout the City (to learn more about the Peace Walls, I highly recommend this PODCAST).  These walls were built to reduce violence but they remain today, 20 years after the Good Friday Peace Agreement. Many of the walls are covered with murals that honor those who died and align with other social movements across the world. The walls evoked strong emotions in all of us and raised deep questions about security, peace, cohesion and justice. NIHE officials are working with local communities to build the trust necessary to remove the walls but they only move as fast as the slowest people in the neighborhoods.  Some of us thought that was too slow, but of course, none of us will have to live with the consequences of removing the walls.  We did visit one neighborhood where the wall has been successfully removed so perhaps there is reason for optimism.

Our next visit was to a mixed housing community where Catholic Nationalists and Protestant Unionists live together in social housing developed by a local nonprofit. Housing schemes that are no more than 70% of one group are able to receive extra funding to support programs and services that promote integration and cohesion. 78% of the people on social housing waiting lists have expressed preference for mixed housing. The housing in Northern Ireland is financed under the U.K. system where the developer receives a grant for 50% of the TDC, a loan for the other 50%, and an operating subsidy to cover the gap between tenant rents and operating costs. Many tenants pay no rent and the average is around 15-18% of their income. 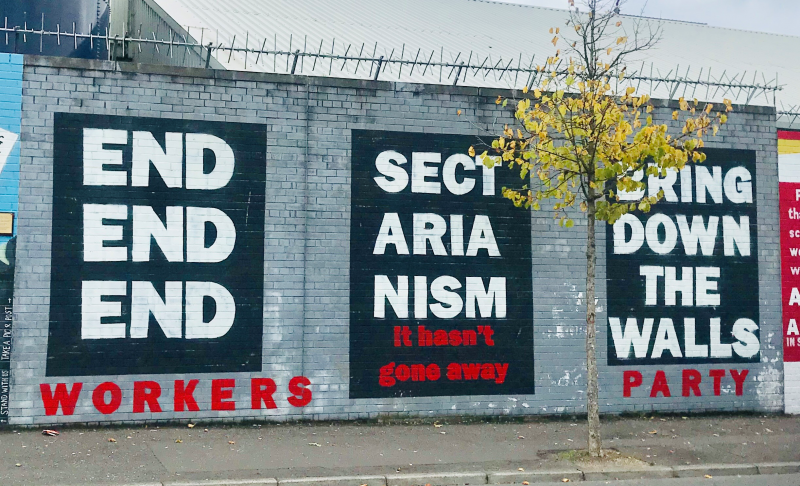 The final visit of the day and the trip was perhaps the most inspiring and exciting. Thanks to an introduction from the Oak Foundation which funds housing groups in Boston and Belfast, we were able to visit an Irish Language Institute called Cultúrlann McAdam Ó Fiaich in West Belfast.  According to their website, the Institute is “home to a range of different Irish language, artistic and cultural activities for everyone in the community.  Irish language classes, art workshops, céilithe, events for young people, concerts and art exhibitions all take place throughout the year.”  The current executive director told us that his parents and other activists in the 1960s formed an Irish Language School in defiance of the British Government. He was educated there and the school became a symbol of the resistance movement because the government refused to acknowledge or fund the school. Nationalists were able to point out the hypocrisy of the government claiming they wanted peace while they denying support for an Irish Language School.

We then heard from Dessie Donnelly the executive director of Participation and the Practice of Rights (PPR), a community organizing organization. Dessie described their human rights approach to tenant organizing and how they are building power for low income people in both Catholic and Protestant communities. His organization is challenging the Northern Ireland Housing Executive and the government in general to confront the deep inequities in their society and the structural obstacles that perpetuate them.  He pointed out that Catholics must wait longer for social housing than Protestants because there is much greater need in the Catholic Community (in two adjacent neighborhoods the need was 938 homes in Catholic district and 38 homes in Protestant district). While all of us were tired at the end of the day and the end of a busy week, we left the visit inspired and energized at the idealism and tenacity of these activists.

Spending eight days travelling with colleagues in Ireland was a privilege that I won’t soon forget.  Let me share a few of my lasting impressions and memories.

During one of our first bus rides, I was sitting with a colleague who asked me what I like about working at MACDC.  Not surprisingly, I had a long list to share. But one thing I neglected to say seems particularly important to say now.  One of the great things about working at MACDC is that I get to travel abroad with colleagues and come home with new insights, memories and friends! 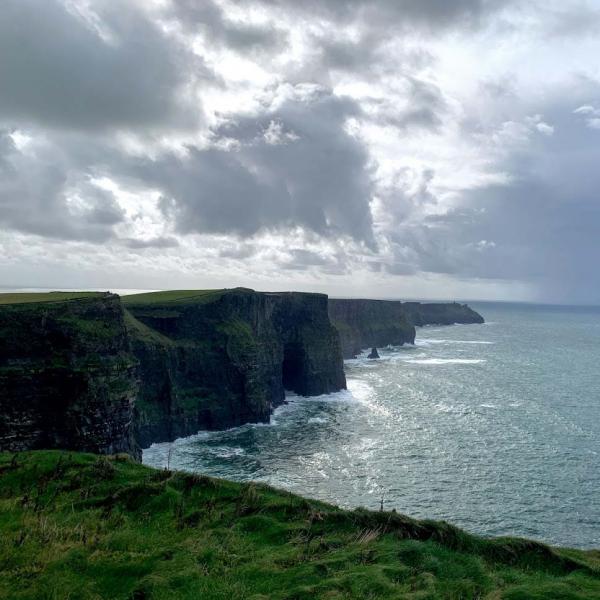 Over the past 10 years, MACDC members created or preserved 43,064 jobs.